A Perspective on Russian Cyberattacks and Disinformation

“Glenn Gerstell, a senior advisor at the Center for Strategic and International Studies and former general counsel of the National Security Agency, was interviewed at a Wall Street Journal event in San Francisco in front of a live audience. The discussion focused on Russian cyberattacks against Ukraine and Russia’s use of disinformation. Highlights of the discussion follow.”

The threat of Russian cyberwar

“Russia is ramping up attacks on Ukraine’s digital infrastructure. The US could be next.”

Assessing the Threat of Cyberwarfare in Ukraine

“As the war in Ukraine unfolds, there are questions on whether Russia is planning a cyberspace attack. TaiwanPlus reporter Yin Khvat speaks to Glenn Gerstell at CSIS, the Center for Strategic International Studies — who was also general counsel of the United States’ National Security Agency — to find out more.”

“Last week, NYPD Deputy Commissioner of Intelligence & Counterterrorism John Miller joined state and city lawmakers in sounding the alarm, telling New Yorkers to be on the lookout for cyberattacks.”

“The use of information warfare in Ukraine is a harbinger of the future in which conflicts will be shaped by information before a single shot is fired, said Glenn Gerstell, a senior adviser in the international security program at CSIS.”

How worried should we be about Russian cyberattacks?

“One way to gauge what potential Russian attacks could look like is to analyze past events. ‘We know from what Russia has done in the past, what they’re capable of,’ says Glenn Gerstell, former General Counsel of the United States National Security Agency from 2015 to 2020. ‘And they’ve used Ukraine as a little bit of their cyber punching bag, so to speak.’”

‘We are not ready’: a cyber expert on US vulnerability to a Russian attack

“We spoke with Glenn S Gerstell, a senior adviser at the Center for Strategic and International Studies and the former general counsel of the National Security Agency, about the likelihood of serious cyber warfare – and whether the US is prepared to respond. ‘If we had approached this correctly 20 years ago, we would be largely invulnerable to cyber-attacks,’ he said. ‘But unfortunately that is not the case.‘”

The FTC Jumps Into Log4j Cleanup With One Foot

Joining Cyberlaw Podcast host Stewart Baker, and fellow guests Tatyana Bolton and Mark MacCarthey, Glenn Gerstell gives a tour of China’s tech regulatory landscape, and the remarkable decline in the fortunes of consumer tech firms in that country…covers the latest story about security risks and telecom gear from China…explains the charges brought in China against Walmart for breaches of cybersecurity laws…and covers the announcement by Lloyd’s of London that cyber insurance won’t cover cyberattacks attributable to nation-states.

Constitutional Values and the Rule of Law in the AI Era: Confronting a Changing Threat Landscape

This event was part of a three-part symposium on Security, Privacy, and Innovation: Reshaping Law for the AI Era. The second session of the symposium focused on how AI-enabled technologies are changing the threat landscape and consider safeguards needed to protect constitutional values and the rule of law more broadly. An expert legal panel considered issues such as the adequacy of the Fourth Amendment in the AI era; the unique equities and issues raised by government use of AI in the intelligence, law enforcement, and border security contexts; and growing concerns around algorithmic bias, biometric technologies, deep fakes, malign information, and other AI-enabled cyber activities, and the need for regulation to address these challenges.

Allies, Enemies, and the Homefront Part 1: The National Security Implications of Antitrust

The first of a four-part series hosted by the National Security Institute (NSI) examining the national security implications of antitrust challenges at home and abroad. This first event provides an introduction of domestic and international antitrust laws, examine the role of the U.S. tech industry in promoting U.S. national security and economic interests, including providing historical frameworks leading up to the current call by U.S. lawmakers to introduce antitrust lawsuits to protect consumers here in the United States.

Kaseya Ransomeware Attack — a Sign of Things to Come

Glenn Gerstell discusses the Kaseya ransomware attack and its implications.

Former NSA general counsel Glenn Gerstell joins Andrea Mitchell to discuss the wave of recent cyberattacks, and what the U.S. should do to combat them.

After A Major Hack, U.S. Looks To Fix A Cyber ‘Blind Spot’

“No one had reason to be suspicious, or the legal authority to monitor, as that software update was sent out electronically from SolarWinds to 18,000 organizations, including nine U.S. government agencies…”

“We begin the conversation by getting Glenn’s thoughts on why he believes that online disinformation is a national security threat, why cyber-propelled disinformation is very different from the spread of ‘old-fashioned’ propaganda, and whether the 2020 Election’s disinformation was primarily bolstered by Russia or domestic actors…”

Fmr. top NSA lawyer on how to fight the national security threat of disinformation online

“Glenn Gerstell, the National Security Agency’s former general counsel joins Andrea Mitchell to talk about actions that need to be taken to stop the spread of misinformation online, including about vaccines. ‘For many, many years anti-vaccination websites have enjoyed a field day on Facebook for quite some time, fueling their falsehoods about the efficacy of vaccines,’ he says…” 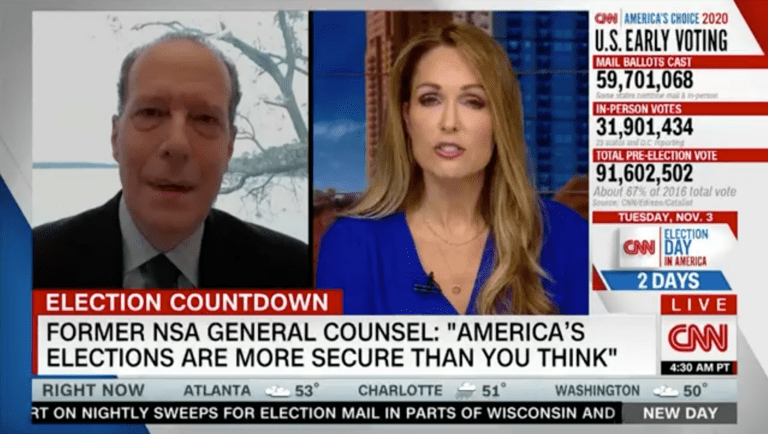 Before we regulate Big Tech, let’s make sure we don’t hurt national security

“With the laudable goals of promoting competition and outlawing unfair tactics in the online world, Congress is considering antitrust bills that would regulate how companies such as Apple, Amazon, Facebook (Meta), Google (Alphabet) and Microsoft treat other businesses that use their digital platforms. Regardless of the extent of regulation, everyone recognizes that the platforms must be kept free from malware and spyware. But some of the provisions in the bills might inadvertently undercut the ability to do that…”

“As Russian missiles rain on Ukraine, there’s another battle brewing — in the cybersphere. Destructive malware has flooded hundreds of Ukrainian websites and computers since Vladimir Putin announced his invasion. It would be a mistake to assume such attacks will remain limited to Ukrainian targets…”

“President Joe Biden has taken forceful and public efforts to address the ever-worsening scourge of Russian-based ransomware attacks. By taking ownership of the issue, however, he inadvertently reduces the pressure on the two groups that can fix the problem: Congress and the private sector…”

“Managing competition with an ever more assertive China isn’t expressly on the agenda for President Biden’s meetings this week with European leaders. But the issue of how best to counter China will nonetheless percolate through their deliberations, surely influencing the expected American agreement to Europe’s proposal for a new EU-U.S. Trade and Technology Council…”

There’s a Big Gap in Our Cyber Defenses. Here’s How to Close It.

“Foreign adversaries who use U.S. servers are hiding in plain sight, but we can unveil them without violating the Constitution…”

We Can Take Advantage of the Russian Hack. Here’s How.

“It’s unrealistic to think we’ll be able to detect and stop every future attack; yet there are bolder steps the government can take now that will make a big difference in protecting its vital information and systems and aiding the private sector…”

Among the Election Winners: Disinformation, By a Landslide

“The Election Day results aren’t all in, but already there are three clear winners: disinformation by a landslide, early voting by a clear majority, and governmental security steps by a significant margin…”

America’s Elections Are More Secure Than You Think

“Chances are we will soon look back on the 2020 elections as the most secure in our history. There will probably be delays, disputes, and disinformation. But actual large-scale chicanery with the balloting or tabulation won’t be among the problems…”

To Prevent the Next Pandemic, Global Spy Agencies Must Join Forces With the WHO

“To prevent this type of total systems failure from happening again, we need a better way to stop deadly pathogenic outbreaks in their tracks at the earliest moment. The bad news is that we can’t do that under the current global health system. The good news is that the solution is within our grasp…”

Public Surveillance to Keep Us Healthy and Protect Our Privacy

“If the Black Death in 1348 and the Spanish Flu in 1918 accelerated existing but nascent societal trends, what developments will the Covid-19 pandemic jump-start? While some developments will be revealed only retrospectively, one is immediately manifest: public health requirements will force us to decide just how much technology-fueled surveillance we really want…”

Four ways U.S. intelligence efforts should change in the wake of the coronavirus pandemic

“While intelligence professionals must continue working as usual during the coronavirus crisis, their jobs must change post-crisis in four fundamental ways: The scope of mission must be broadened; public information relied on much more; taxpayer dollars used with greater effectiveness; and our battle against foreign disinformation intensified…”

I Work for the N.S.A. We Cannot Afford to Lose the Digital Revolution

“The threats of cyberattack and hypersonic missiles are two examples of easily foreseeable challenges to our national security posed by rapidly developing technology. It is by no means certain that we will be able to cope with those two threats, let alone the even more complicated and unknown challenges presented by the general onrush of technology — the digital revolution or so-called Fourth Industrial Revolution — that will be our future for the next few decades…”

What Does it Take to Lead NSA’s Legal Team?

“It is an organization both respected and feared: the US National Security Agency (NSA). From its humble beginnings as a US Army unit charged with decrypting enemy codes during World War I, today’s NSA stands at the forefront of technology, privacy, and national security issues. It has played crucial roles in protecting the United States from foreign threats. But the NSA’s mass surveillance programs, as authorized by statutes such as the US Patriot Act, have also spawned great alarm. In an agency subject to increasing public scrutiny, what does it take to lead the NSA’s Office of General Counsel?”…read more

The Cybersecurity 202: Government may be too slow to tackle cyberthreats, outgoing NSA attorney warns

“New forms of ‘unconventional’ thinking are critical when it comes to the risks of hacking threats from China and other U.S. adversaries on American systems. The speed at which technology advances cannot be underestimated, nor can the threat that hacks pose to American national privacy and security. 30 year old laws and regulations on cybersecurity and tech firms will need to be updated soon, before technology fully outpaces legislation…” read more

“The inherent legal, ethical, and societal implications implicit in the advent of 5G networks and other rapid technological changes are immense, and new rounds of privacy definitions and considerations must follow with due diligence if the US is to keep up with the changes. Gerstell also explains the NSA’s new take on transparency in the era of agencies and corporations being held accountable by audiences across the globe, and how they plan to navigate the space between keeping information safe and secure, and align sure the American public’s constitutional rights remain protected…” read more

A discussion with Michael Morell, former Acting Director of the C.I.A.…read more

Login to Glenn S. Gerstell
Reset Password
Enter the username or e-mail you used in your profile. A password reset link will be sent to you by email.